Following the release of his debut album, ‘Bravo’, superboy Cheque has revealed his 2 favorite albums of the year 2021.

Taking to the micro-blogging platform, Twitter, Cheque Tweeted that his favorite 2021 albums are Bravo and Made In Lagos by Big Wiz.

Bravo features ace artists including Ayra Starr on “Dangerous“, Jackboy on “No One Else“, Olamide on “LOML” and Fireboy DML on the previously released hit song “History“. 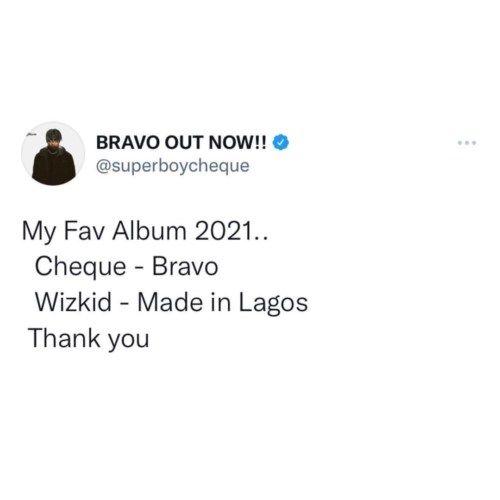 Wizkid’s ‘MIL’ was released in October last year. A 14-track album that has done nothing but shake grounds and break barriers. Off the album is the record, Essence, featuring Tems which has been certified “The Perfect Summer Jam” by international music executives.

Tonto Dikeh Give Reason Why Many People Go Into Unprepared Marriages