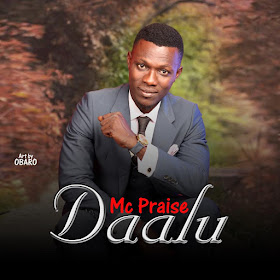 Meet Nigerian Gospel Singer Mc Praise, he was born in Lagos Nigeria, into a family of 6, from Ukpor Nnewi south in Anambra state. Mc Praise encountered Christ and became new being in 2010. A graduate of industrial production engineering from Nnamdi Azikiwe University Awka,Anambra State, Nigeria. He journeyed into the world of comedy from his school days and worked with Rhythm 95.7 Awka while it was still in existence. He began his career as a praise and worship singer at the Believers Love World a.k.a. Christ Embassy. Mc Praise is one of the gospel music ministers, who has continued to be a blessing to the body of Christ. His latest music titled ‘Daalu’ meaning (thank you) will be of high demand by local and international audiences

As an anointed praise and worship singer filled with the Holy Ghost, His love for God and passion for the gospel is evident in the lyrics of his songs and the power in his ministrations on stage. McPraise is a committed member of his local assembly and ministers in several palaces

Achukwu Patrick Somuadina who is also a creative fashion designer, is popularly known as McPraise, his close friends refer to him as ‘Mboma .’ He once stated that: “I am a gospel music minister by the will of God; I love Jesus with my whole heart and everything within me, and I try to let how I feel about him reflect in the songs that I sing.”

According to him: “I love to lead God’s people in praise and worship, because to me, it is one of the biggest opportunities I have received from God. I do other genre of music though, but I love to praise and worship Jesus all the time. It’s a blessing to be in a position where God can trust you to lead his people in songs of praise and worship to him. So, in all, I can say I do songs that bless and reach the spirit, soul and body of my listeners,” he said, adding that, “I am a recording artiste, my first album was produced in  2011 which did not enter the market due to financial constraints. I also recorded a single, “heavenly loaded “in 2010 and the same reason preempted  me from pushing it into the market , in 2014 the song Daalu was recorded and is fulfilling its purpose.

McPraise is a music minister, comedian and fashion designer business man by the will of God. As a worship leader, song writer and performing artiste, he has written and performed multiple songs like “Daalu”, “Heavenly loaded”, “show yourself,” “Ibu chim” “onyenwembuchim”. Confident, I believe

“Be Careful, They Are After You” – Yoruba Monarch Warns Naira Marley (VIDEO)